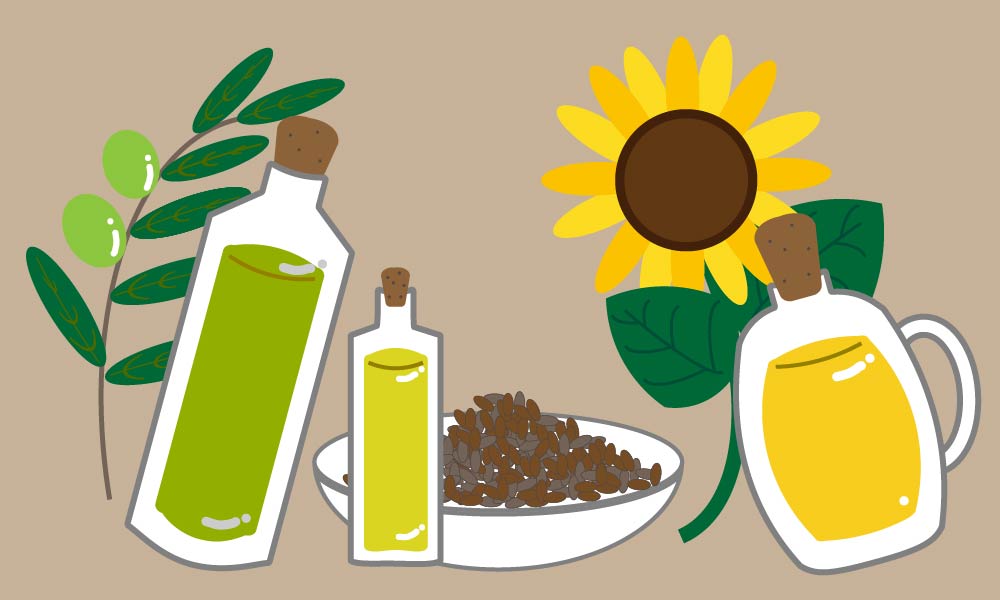 Saturated fatty acids are solids at room temperature and highly contained in fat.

Like other fats and oils, saturated fatty acids are digested and absorbed in the body and become energy, so it is necessary to eat them as food, but of course, excessive intake not only causes obesity, but also increase LDL cholesterol in the blood. As it increases, it causes high blood pressure and arteriosclerosis.

I mentioned the fat of cows and pork as an ingredient with a lot of long-chain fatty acids, but the body temperature of cows and pigs is around 39 degrees Celsius, which is higher than that of humans. Therefore, when it is taken into the body of a humans whose temperature is lower than that temperature, the fat hardens and can't be easily digested and absorbed, which puts a strain on the gastrointestinal tract and overeating remains in the body as visceral fat.

Unsaturated fatty acids are liquids at room temperature and highly contained in oil.

Unsaturated fatty acids are generally easy-to-oxidize oils, but oleic acid is difficult to oxidize, making it suitable for long-term storage and cooking. It also works to regulate the cholesterol balance in the blood and improves gastrointestinal motility. It is also produced in the body from proteins and carbohydrates, but it is abundant in oils such as olive oil, rapeseed oil, rice oil, and avocado oil.

Omega-6 oils are abundant in oils such as sunflower oil, cottonseed oil, corn oil, and soybean oil, most of which are linoleic acids.

It is said that linoleic acid lowers blood cholesterol level and prevents heart disease when taken in an appropriate amount, but on the contrary, if taken too much, it causes arteriosclerosis and atopic dermatitis.

Polyunsaturated fatty acids must be taken from the diet, but they are found not only in vegetable oils, but also in meat, eggs, and legumes. In modern times, linoleic acid oil is often used in eating out and many kinds of processed foods. Therefore, there is no shortage in a normal diet. Therefore, it is an oil that I would rather reduce from at home.

Unlike omega-6, omega-3 is an oil that tends to be deficient in modern diets, so you should take it positively.

The intake of α-linolenic acid should be about 1 - 2 teaspoons a day ! However, linseed oil and hemp seed oil are very easy to oxidize and are sensitive to heat, so they are not suitable for cooking. You have to sprinkle it on salads or dishes and store it in the refrigerator. Even though you got good oil, if you oxidize it, it will have the opposite effect, so be careful!

I made a simple table of fatty acids, so please refer to it !

3. Oil you definitely need to avoid

Finally, I would like to talk about oil that must be avoided. It's a trans fatty acid.

Trans fatty acids promote arteriosclerosis, increase the risk of heart disease, and reduce immune function. It also puts a heavy burden on the gastrointestinal tract and can cause skin diseases.

Some trans fatty acids are naturally found in foods and some are artificially made.

Artificially made trans fatty acids are margarine, fat spread, shortening, which is made by adding hydrogen to oil that should be liquid, and cheap edible oil processed at high temperature. Most of them have a higher content than natural ones.

Moreover, artificially made products have an extremely high risk of health damage because their molecular structure is unnatural.

In fact, these are already banned in the US, Canada, Taiwan, Thailand, etc. It is a dangerous oil whose use is restricted in the EU, Singapore, South Korea and China too.

Currently, there are no restrictions in Japan, and margarine is sold normally, and mysteriously most processed foods such as sweets, bread, and cakes are used (due to adult circumstances. Lol), so it may be difficult to avoid.

Of course, the ideal is to make everything handmade and not add extras, but take this opportunity to check the ingredients when purchasing food.

Then what kind of oil is good ? For heating, olive oil, rapeseed oil (other than canola oil) and avocado oil, which are rich in oleic acid, are good.

And to sprinkle on salads and dishes without heating, flaxseed oil and hemp seed oil, which are rich in α-linolenic acid, are good.

I would like you to have these two types.