How bad is the oxidation of oil? Critical temperature and smoke point that vary depending on the type of oil 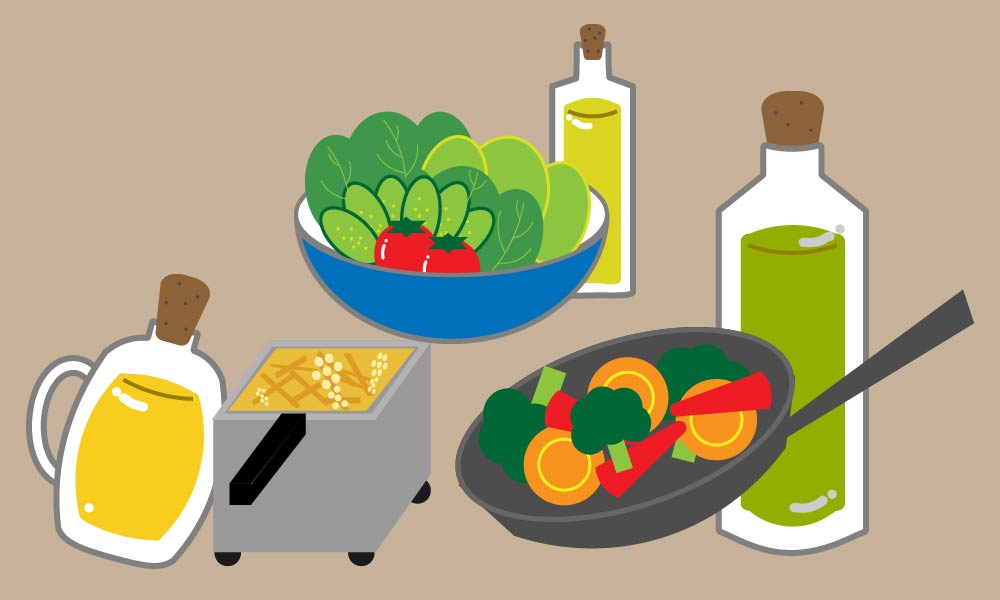 Some oils require careful storage and cooking. I would like to introduce some precautions when using oil.

As I mentioned on another page, oil is oxidized by light, air, heat, humidity and metal.

For example, when the container is transparent and exposed to electricity or sunlight, when it is stored in an unsealed container, or when the remaining oil is used many times.

Vegetable oils, which are unsaturated fatty acids, are especially prone to oxidation

That said, unsaturated fatty acids contain a lot of essential fatty acids that the human body cannot produce, so it is an oil that should be taken positively. So be sure to get good quality oil in the right way.

2. What is the critical temperature of oil?

The temperature at which harmful substances ( peroxidants ) begin to be generated when oil is heated.

The critical temperature varies depending on the oil and is determined by the fatty acids and other components contained in the oil. This is why some oils are good for cooking and some are better to eat raw.

3. What is the smoke point of oil?

When oil is heated, it exceeds the critical temperature, smoke begins to be emitted, and there is a risk of ignition.

Hazardous substances (peroxidants) are generated when the smoke point is exceeded, similar to the case when the critical temperature is exceeded. Also, trans fatty acids are generated. Oxidation also increases, which is dangerous. Not only is the oil itself dangerous, but the flavor and nutrients of the ingredients it cooks with are also compromised.

Furthermore, even with the same oil, the smoke point will decrease as it is used repeatedly. Therefore, the older oil, the easier it is to smoke, so you need to be more careful when using the oil in fried foods.

If the oil smokes or smells unpleasant during cooking, turn off the heat immediately and wait for the oil to cool before changing to a new one!

In general, refined oil has a higher smoke point and is more stable than unrefined oil, even if the ingredients are the same. However, the nutritional value and flavor are reduced, so it is important to choose a cooking method that takes advantage of the characteristics of each oil.

So keep in mind that "cold pressed" oils and oils labeled "unrefined" should be cooked at temperatures lower than this table .

By the way, oil that can be heated can be eaten raw or heated!

4. How to identify oxidized oil

I've talked about the danger of oil oxidation, but you can't know the exact numbers unless you measure them properly.

However, it is possible to know the standard of oxidation.

Oxidized oil has a lower critical temperature and smoke point than fresh oil and is more prone to smoke. Be careful when smoke comes out without applying too much heat.

②Sticky when the oil cools

Oxidized oil is simply a state in which oxygen is combined with fatty acids to make the molecules larger, so it is not a smooth oil but a thick and sticky oil.

③Bubbles are hard to disappear

Smooth fresh oil disappears immediately when bubbles are formed, but thickened oil does not easily disappear.

As the oxidation progresses, the color gradually turns brown and becomes darker.

It may be difficult to judge the scent, but be careful if the scent is different from the one at the time of opening and is not a good scent.

Even if you get good quality oil, it will be oxidized, and if you use it above the critical temperature, it will be poisonous to your body and the oil will be wasted.

Please pay attention to the storage method and cooking temperature by referring to what I talked about on this page.